Posted on November 10, 2011 by Newcastle University Institute for Sustainability

Following the signing of a Research Concordat between the University and Northumbrian Water Ltd in June 2011, the pace of interaction between teams from both organisations is accelerating, and yielding all sorts of ideas for collaborative research on sustainability issues – and many of these go far beyond our traditional areas of interaction on water and wastewater.

Because water is heavy and water companies have to pump a lot of it – as well as treat it using stirrers and dosing equipment – a lot of energy is consumed in ensuring that we always have clean water in our taps, and that sewage is disposed of in the most environmentally friendly way.

This in turn means that the carbon footprint of the water industry is quite significant – perhaps as much as 5% of total national emissions. Ironically, the tighter we make the environmental limits for disposal of wastewater to rivers or the sea, the more we pollute the atmosphere with CO2 – at least using the technologies presently available and reasonably foreseeable.  Hence anything that can significantly reduce energy use and net CO2 emissions from the water industry is very welcome.

As a prelude to a major research brainstorming session on 4th November 2011, a high-level delegation from the University visited Northumbrian Water’s fabulous wastewater treatment system at Bran Sands near Middlesbrough. 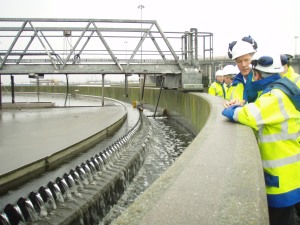 The site is impressive in wastewater treatment terms alone, handling sewage flows equivalent to 1.2M people.  However, sewage only comes from 300,000 actual people – 75% of the wastewater comes from the major process industry plants of the south bank of the Tees.

This is challenging in itself, as many industrial wastewaters are rather different from domestic sewage. The way the various cocktails of wastewaters are handled at Bran Sands is very impressive, and goes far beyond simply meeting the discharge consent limits set by the Environment Agency. 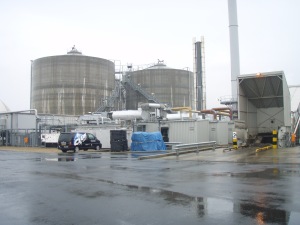 Most striking of all, however, is the recently-established solid waste processing and energy generation system at the tail of the works.

In this system, biological solids removed from sewage during treatment are first heated (in what amount to giant pressure-cookers operating at up to 165oC and 6 bar pressure), which bursts the cell walls in organic matter, making it readily amenable to digestion by bacteria that only work in the absence of oxygen (anaerobes). 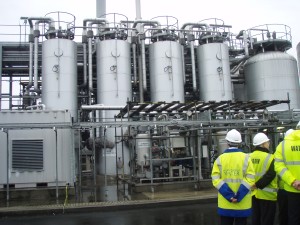 This digestion happens in three 21m-tall concrete tanks, each capable of holding about 6700m3 of the pre-cooked wastes. 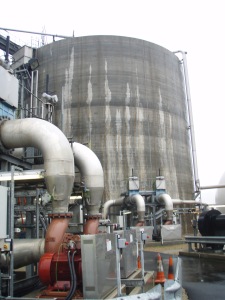 The digestion of the biological solids releases methane (usually around 33,000 Nm3/d), which is captured and stored for an average of an hour in two white spheres, whence the low pressure gas (30 mb) is pressurised up to 200 mb and injected into three G E Jenbacher engines (one rated at 0.7 MWe, the other three at 1.2 MWe). 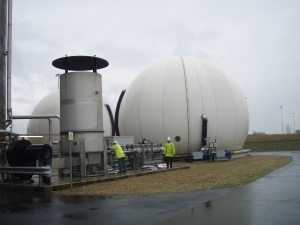 The electricity produced by these turbines provides between 50 and 70% of the power demand on the entire Bran Sands site. Waste heat from these engines is captured and used to raise the steam used in the “pressure cooker” phase of the process, supplying about 40% of the energy needed to achieve thermal hydrolysis of the cell walls.

With this efficient use of renewable energy (the ultimate source is biological, of course), the overall carbon footprint of the Bran Sands operation has been more than halved.

The benefits don’t stop there.

After digestion is complete, the remaining solids form a completely sterile (pasteurised), essentially odourless dark brown mulch, looking for all the world like milled peat, but far more environmentally benign than that dodgy product. 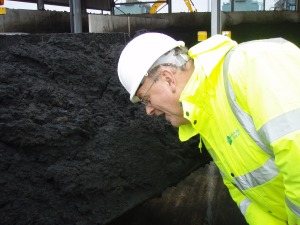 Getting a lungful of the odour-free final mulch

I can vouch for the lack of odour – I stuck my nose right up to the stuff and inhaled deeply – it’s absolutely fine.  You’d never know it had ever been stinky sewage.

This mulch is an ideal additive to agricultural land, helping to close the nutrient cycle, ensuring that soil fertility can be maintained into the future in the safest and most sustainable of ways. 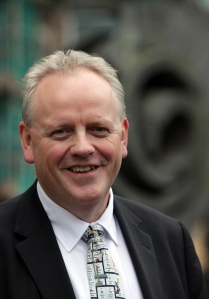